After making a number of custom-made modifications to its Globar® SiC heating elements, Kanthal was able to help Toyota Motor Manufacturing Poland increase the lifespan of its elements to an average of two years from seven months.

Located across two plants in southern Poland, in Wałbrzych and Jelcz-Laskowice, Toyota Motor Manufacturing Poland (TMMP) is the center of Toyota’s European production of conventional and hybrid powertrains. The two plants have a combined production capacity of 1.5 million components per year.

TMMP produces engines, transmissions and transaxles that are sent to one of Toyota’s assembly plants in the Czech Republic, France, Britain, Russia, Turkey, South Africa or Japan. As such, the company plays a vital role in Toyota’s production chain. Any delays or stoppages will have a knock-on effect on other plants and can be costly. 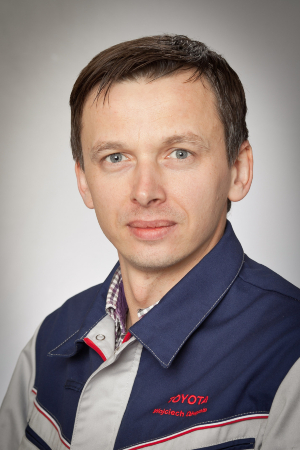 Wojciech Dżugała, Aluminum Casting Maintenance Assistant Manager, TMMPAs a result, TMMP is continuously looking at ways to improve reliability and productivity in its assembly lines. In 2015, it decided to look into improving the reliability of the silicon carbide (SiC) elements used in the casting shop at the Wałbrzych plant. The average element was unstable and lasted for seven months, which was unacceptable and resulted in too many stoppages in production.

“For us the most important factors when it comes to heating elements are long life, and ease and safety of maintenance,” explains Wojciech Dżugała, Aluminum Casting Maintenance Assistant Manager, TMMP. “Being able to replace elements on schedule helps meet both needs. It means no stops in production, and also means our maintenance staff do not need to work under too much stress and pressure, which reduces the safety risks.”

The first step was to contact Kanthal, since it had successfully helped TMMP to redesign new Tubothal® cartridge heating elements only a few years earlier. Those modifications saw the average lifespan of the elements increase to 18 months from 12 months.

Sławomir Nowacki, Maintenance Engineer, TMMP“We explained our problem and proposed that the connections be improved, as this was the main weak point,” says Sławomir Nowacki, Maintenance Engineer, TMMP. “Based on this, we worked together to design a new element. We could not just take a product off the shelf – it was a process that we had to go through together.”

Kanthal then got to work on redesigning the connection on its Globar® SiC element to reduce the risk of electrical fault while also ensuring minimal heat loss from the furnace. After a few months of trialing different solutions and modifications, a final version was perfected. It included a special cold terminal and support sleeve on the cold ends, which ensured minimal heat loss and greater efficiency. It also included a cable with high temperature insulation and special saddles to ensure a stronger, more durable connection.

The customized Globar® element performs well and has a 240% longer life span than the previous version.

At the beginning of the project, TMMP requested a SiC element that could provide stability for 12 months. After four years of using Kanthal’s customized Globar elements, the average lifespan is 24 months. The improvement is so dramatic that TMMP has since shared the redesigned element with its other plants in Europe.

As an additional benefit, delivery times are shorter and shipping costs lower since the Globar® element is manufactured in Europe; the previous SiC elements were made in Japan.

“The final result is a complete improvement and we are very satisfied,” says Dżugała. “It’s great to know that Kanthal is open to discussion and making modifications to its products. It’s important for us to be able to work with suppliers who can cooperate and find solutions for our problems.”